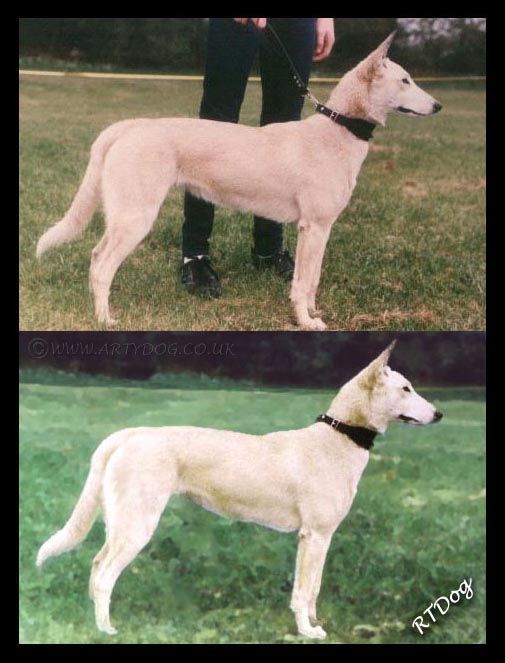 The brief here was to correct the red colour cast to reveal the true shade of Tammys' coat. To invisibly remove the lead and her handlers' hands, legs and feet. The light coming through the hedge in the top right of the original image and the yellow path were both decided to be unnecessary distractions from the subject

The Lurcher is not a dog breed, but rather a type of dog. It is a hardy crossbred sighthound that is generally a cross between a sighthound and a working breed, usually a pastoral dog or Terrier. Collie crosses have always been very popular. Lurchers can be crossed several times. There is no set type, so they can be as small as a Whippet or as large as a Deerhound; but most are chosen for a size similar to that of a Greyhound, and a distinct sighthound form is generally preferred.

The modern Lurcher is growing from its old image of disrepute to heights of popularity as an exceptional family dog, and many groups have been founded to rehome rescue Lurchers as family pets.

The Lurcher has as many varied uses as types can be crossbred, but generally they are used as hunting dogs that can chase and kill their prey. Many Lurchers today are used for general pest control, typically rabbits, hares, and foxes. They have also been successfully used on deer.